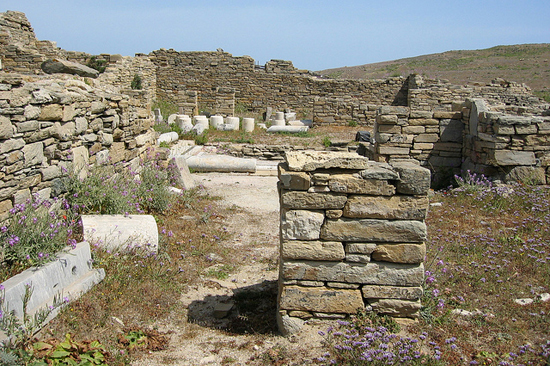 The Hypostyle Hall is one of the most peculiar and interesting buildings of ancient architecture. On the South  face was a portico with fifteen limestone Doric columns. Unlike the main columns, the capitals of columns were  made of marble, like the architrave. After 166 BC the term Delians was replaced with the term Athenians. The huge roof was supported by   44 limestone columns (9x5 columns in series, except that the middle row had only 4 columns, leaving the center space free). The building was  finished in 208 BC, but its purpose  is unknown. Some consider it to be a restaurant. After its destruction , private buildings were built in its place, some of which are  preserved. East of the Hypostyle Hall is the temple of the twelve gods , the Dodekatheon.